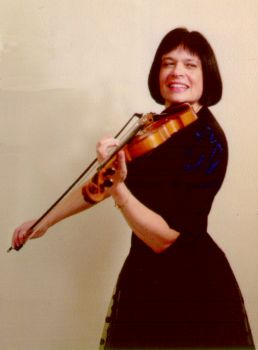 Elizabeth Ann Binks, A.G.S.M., leader of the Aeolian Sinfonia of North London, received the coveted Salzman Scholarship and Scottish Arts Council Award. She has performed with professional orchestras and has given many recitals in such venues as St James Piccadilly, St Martin in the Fields, Regent Hall and Morley College. Elizabeth has also performed at the City of London Festival and other eminent establishments and music clubs. Solo television work includes a live performance for the BBC.

Elizabeth has a keen interest in modern music. She has been a key performer with Exultate and has taken part in works by composers such as James MacMillan, and has also given many first performances of contemporary works.

Educational work has featured strongly throughout Elizabeth's professional life, and has included Wells Cathedral School and the Guildhall School of Music. She teaches violin and viola privately in the Chessington and Kingston areas, gives performances of a wide and varied repertoire from the Baroque era to the 21st Century including popular and lesser known romantic works, salon and film music, also for social occasions and school programmes. She can be contacted on 07947 404484 or 020 8397 1716.